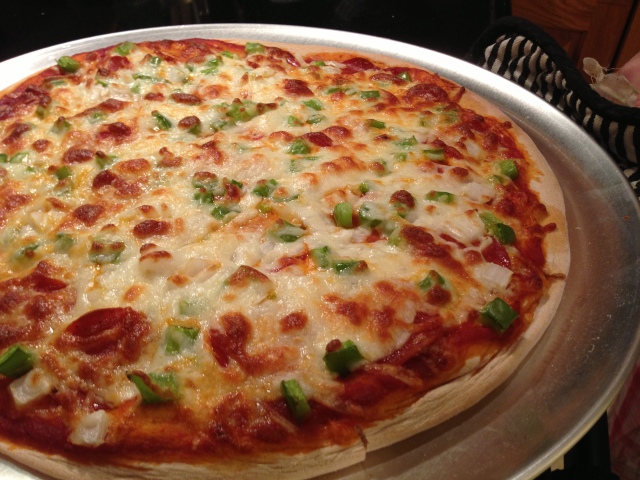 One of my favorite foods is pizza. I love eating it. I was determined to make a healthier version at home instead of eating out at a restaurant. Not only did we save money, we saved calories without losing taste! It turned out great and my husband even enjoyed it. I’m usually not a fan of leftovers, but I liked eating the pizza as leftovers.

Choose MyPlate recommends making half of your grains whole grains and adding more vegetables to your day. Have a favorite pizza crust recipe? Substitute half of the all-purpose flour with whole-wheat flour. I used the Whole Wheat Pizza Dough recipe from the WeightWatchers®* New Complete Cookbook. The recipe made 2 crusts and I froze one of them to use at a later time. The recipe is similar to the Whole Wheat Pizza Dough recipe found on WeightWatchers®* website. I topped my pizza with mozzarella cheese, green pepper, onion, and turkey pepperoni (70% less fat than regular pepperoni). My husband and I can’t tell a huge difference between turkey and regular pepperoni, so I recommend trying it.

After forming the pizza crust, I added the pizza sauce, which I bought from the supermarket. Want to make your own? Try the Quick and Easy Pizza Sauce recipe from UNL Extension.

I added a little bit of cheese to the pizza crust and then added the turkey pepperoni.

My husband and I love green peppers and onions, so I added a lot of them to our pizza.

I finished topping the pizza with the remaining cheese and baked the pizza in the preheated oven to 400 °F for 12 -15 minutes.

To add more vegetables to our meal, we ate the pizza with a side salad. 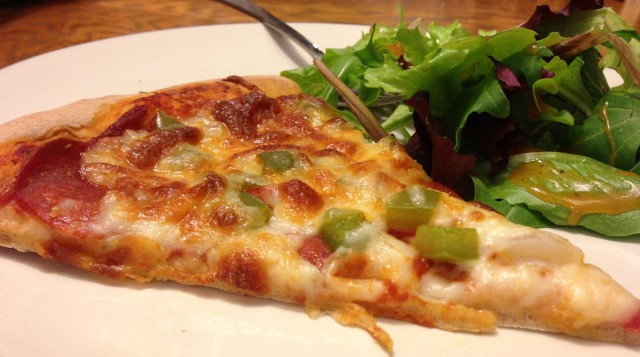 *Reference to commercial products or trade names is made with the understanding that no discrimination is intended of those not mentioned and no endorsement by University of Nebraska–Lincoln Extension is implied for those mentioned.